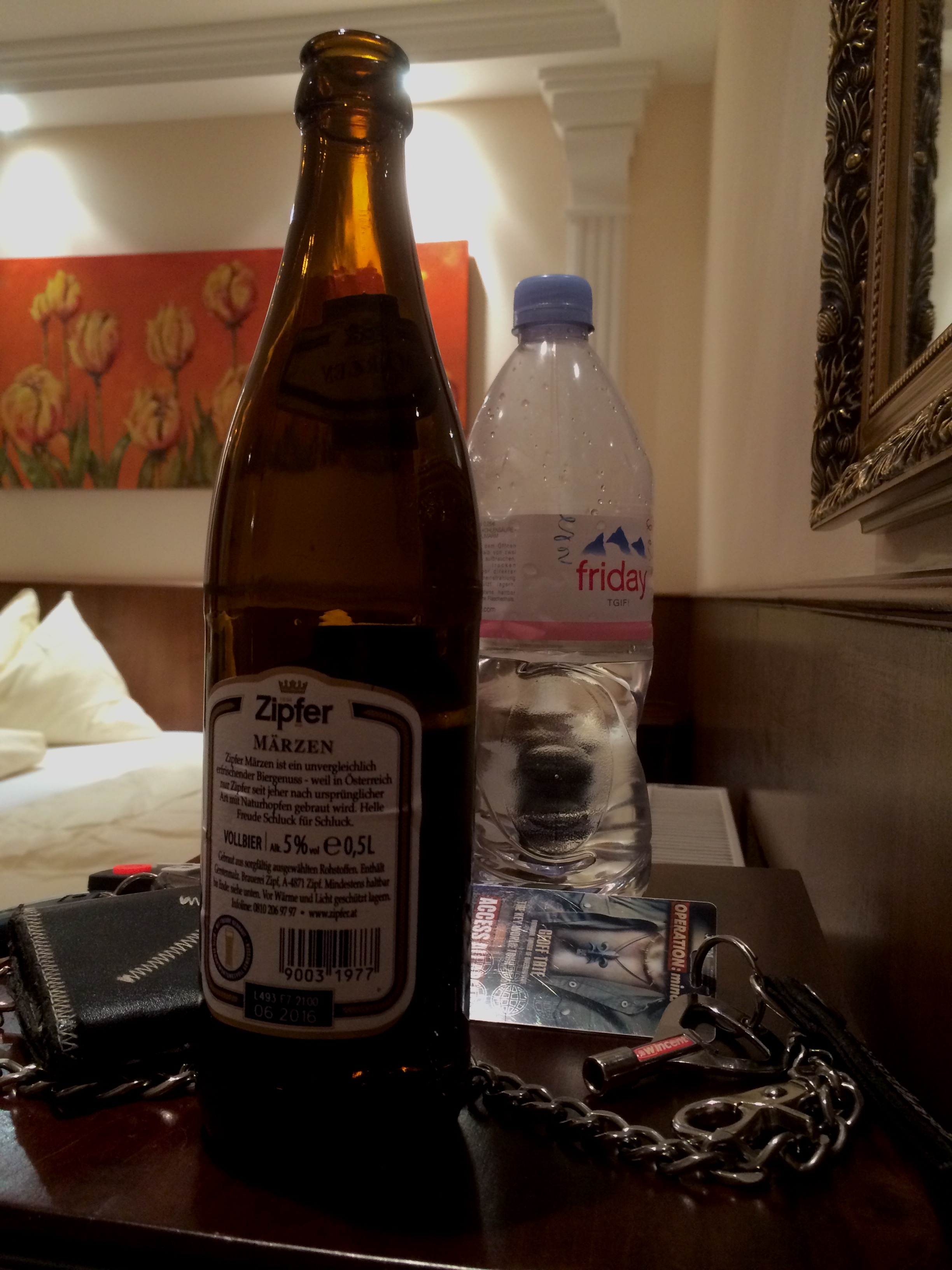 We rocketed down into Austria along what are now familiar roads. I’ve been to Salzburg a few times and it’s a great city, but we didn’t have time to have a look around unfortunately. Checked into the hotel (which was an awesome old building that had been a Gasthof since 1437). The venue was less than five minutes away – The Rockhouse – and it is magnificent. Really nice place with exceptionally nice staff. You knew you were back in Europe – there was a ton of food and drink laid on, and that was before dinner which was cooked by a nice lady upstairs. Geoff and Susan had been into town and had dinner in a restaurant that dates back to the 9th century!!! Awesome. The original staff must have been virtually Roman.


Fire and Water opened the show, then us and then a German band called Wolfen Reloaded. Nice guys. As they were after us I used their drum kit, a Yamaha double bass setup. This, of course, led to cat calls and mockery from various Mindcrimers and Fire or Waterers who were watching from the balcony as we sound checked! Bloody cheek! I’m an artiste don’t you know…;)

Anyway, I weathered the storm of these outrageous slurs from this riff raff and we sound checked without any (more) hassle. The onstage sound was great and all in all I reckon we played pretty well and seemed to go down well. Made a lot of new friends.

A great night all round.

After that, back to the hotel and a beer before crashing out.

The next morning we ambled off into Germany, taking a short detour to show the guys the remains of Adolf Hitler’s house, the Berghof, at Obersalzberg. It’s a fascinating historical place and always interesting having a look around there. The hotel that acted as garrison for the SS guard is still a functioning hotel and – with a little more time – you can ferret out the houses belonging to the Third Reich’s hierarchy…and assorted tunnels and things 😉


So, now that it’s pissing with rain, we’re off to a hotel in Frankfurt. Bochum tomorrow \m/

Pretty straight forward way to spend the day yesterday: driving from England through France, Belgium and The Netherlands to Germany. Camped the night in an excellent hotel in Heidelburg which, dangerously enough, had a bar.

So we had a couple…just to be polite. A few Weissbiers until we were full, pints of Bloody Mary until they ran out of vodka and a couple of Pina Coladas to finish the evening. 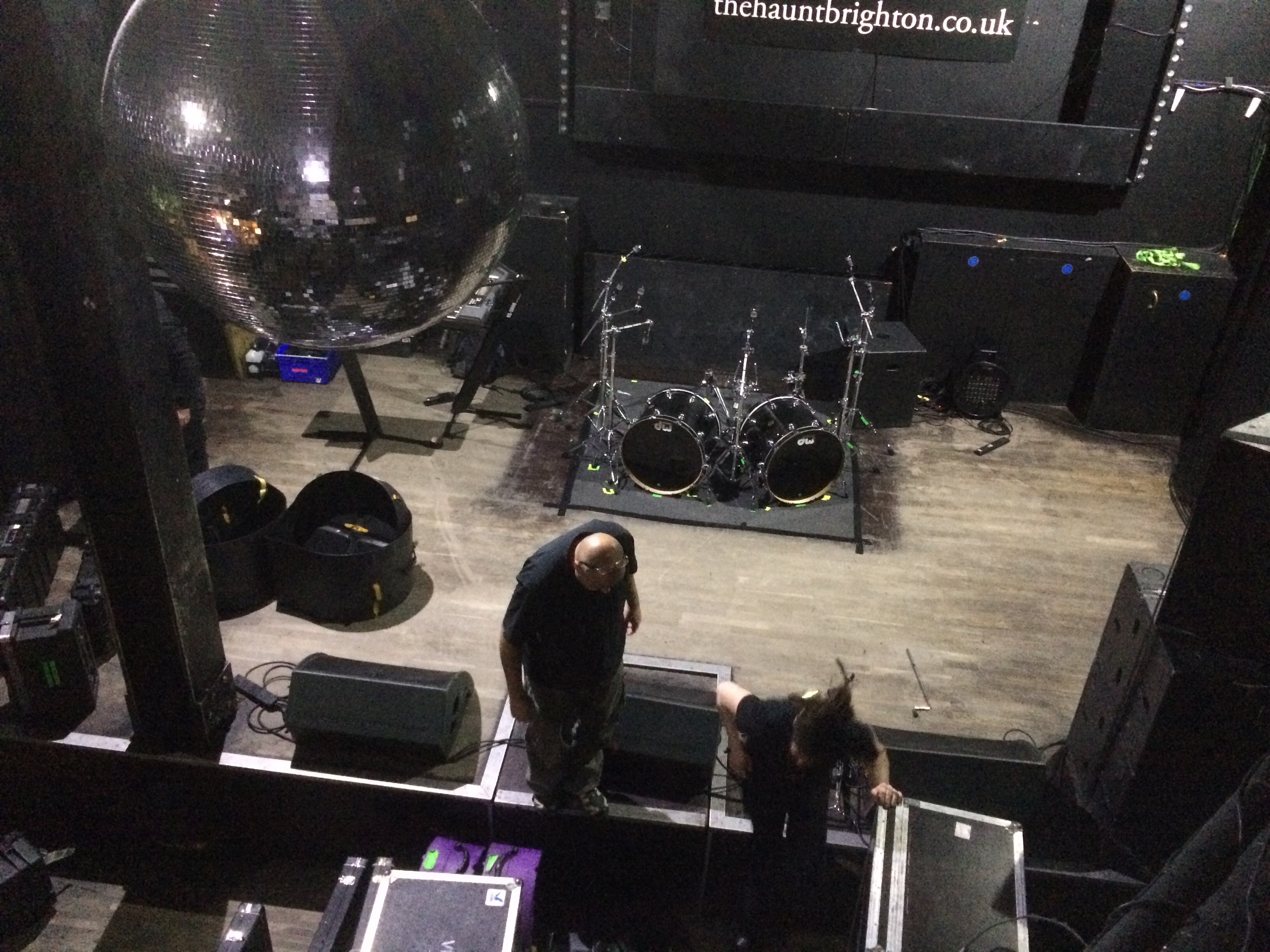 I really like Brighton. It’s a very cool place and I always enjoy visiting. Been a while since I played here; I think the last time was with Blaze at Concorde 2, which is going back a bit. Debbie was still alive when we played that one.

Tonight we were in The Haunt. Never been there before. Late load in, swift sound check and go.

Gig played, gear out the door into the van and off. Only the second time that we’ve had to leave before Operation:Mindcrime have finished 🙁
Anyway…I took the chance to be a fan and got a Disturbed album signed by John, an AC/DC single by Simon and the first Queensryche EP by Geoff 🙂

It was an absolute pleasure to see Charlie Male again, who came down to the show – great guitarist and a good mate. Cheers Charlie.

Off to Dover tomorrow for a two day trip to Salzburg, stopping in Germany tomorrow night. Awesome.

We had a day off in London which was spent back at my house, washing clothes and attempting to stop three cats from climbing in suitcases. We – and the superb Fire And Water – didn’t play the London show; nothing to do with the Mindcrime crew but the show was farmed out by the UK agent (who had already managed to balls up two out of four shows that he was supposed to book) to another London promoter who changed the bill completely. So, to paraphrase Princess Leia in her exchange with Darth Vader after her ship was captured near Tattooine: “Fuck off Darth Promoter and keep fucking off until you get there…and then fuck off some more.” We all hope your raging case of syphilis improves soon. So we had a day to recharge at least before the next leg which begins in Brighton.

After Brighton we head back over the Channel to Salzburg, which we’ve driven past three times in the last ten days and then on to northern Germany (which we’ve been through twice). It’ll be nice to be back in Greater Europa for the final sprint.

Once again, I’d like to go on record and say that the entire Operation:Mindcrime band, manager and crew and the Fire and Water duo have been an absolute pleasure to tour with and to watch perform every show. I’ve seen a few internet heroes taking pot shots at Mister Tate and – on behalf of I.C.O.N I’d like to say – bite me.

Looking forward to seeing them all at the next shows. 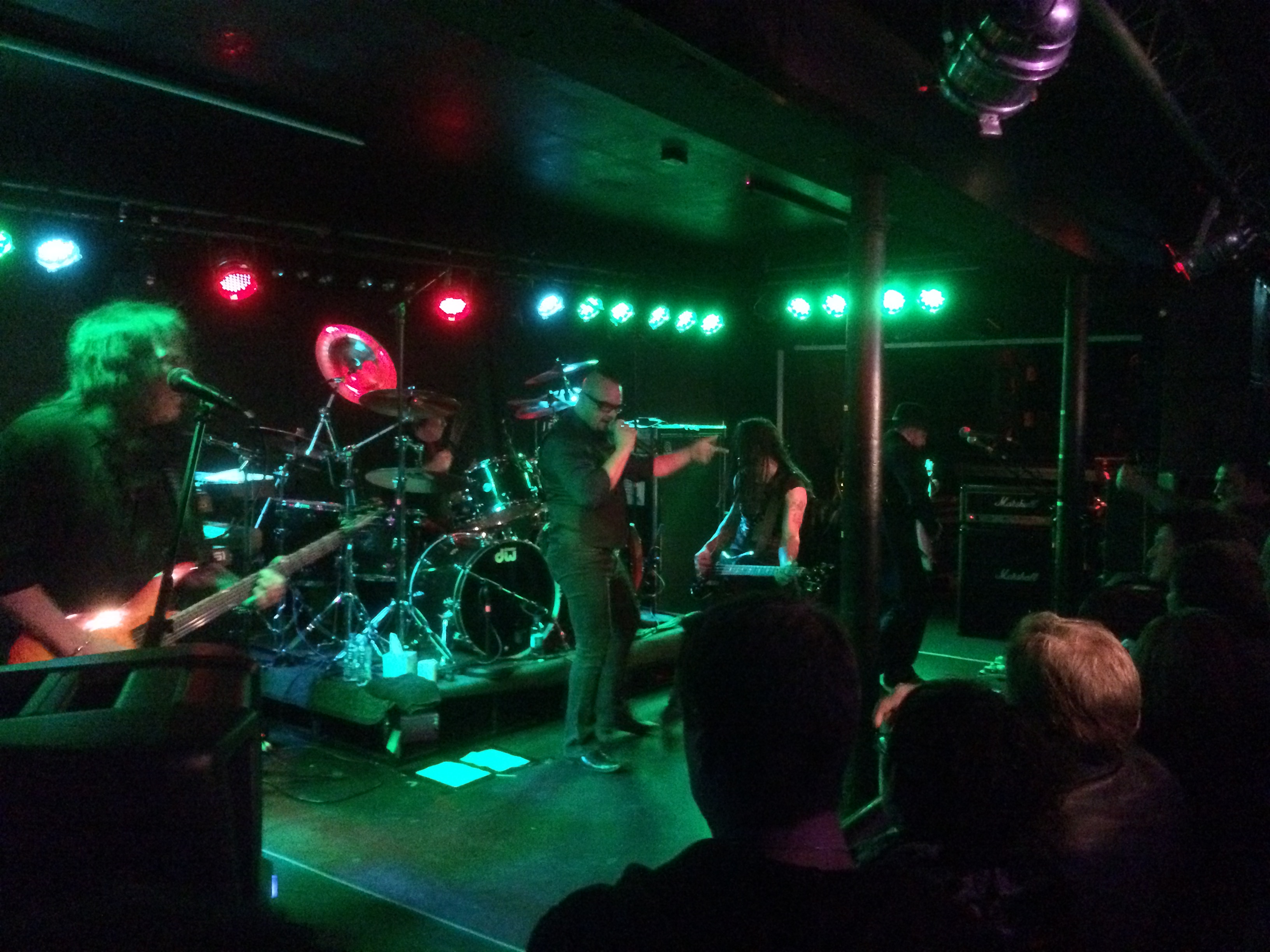 After a good night’s sleep we marched southwards towards Southend, battling the usual terrible motorway traffic. It does say something that we’ve travelled nearly the length of Europe and apart from one border checkpoint between Austria and Germany, these are the worst traffic conditions on some of the bumpiest roads with miles of roadworks and no bastard working on them. Just an observation…

Anyway, we arrived at Chinnery’s without hassle: nice venue on the seafront. The Operation:Mindcrimers were already present and correct and the whole soundcheck accomplished without hassle.

For once there were no catastrophes…no breakdowns…no battling the clock…incredible but true, but it was an uneventful day.

It was an excellent gig; even the rain leaking into the stage couldn’t dampen the enthusiasm. Fire and Water were blinding, we played well, and the headliners stormed it. A great night all round. Our Guv’nor Anna was there to meet the teams and all in all the day/evening ran as smoothly as a smooth thing with the word ‘smooth’ written smoothly upon it.

Then back to Larndan for a day off. Next stop Brighton. 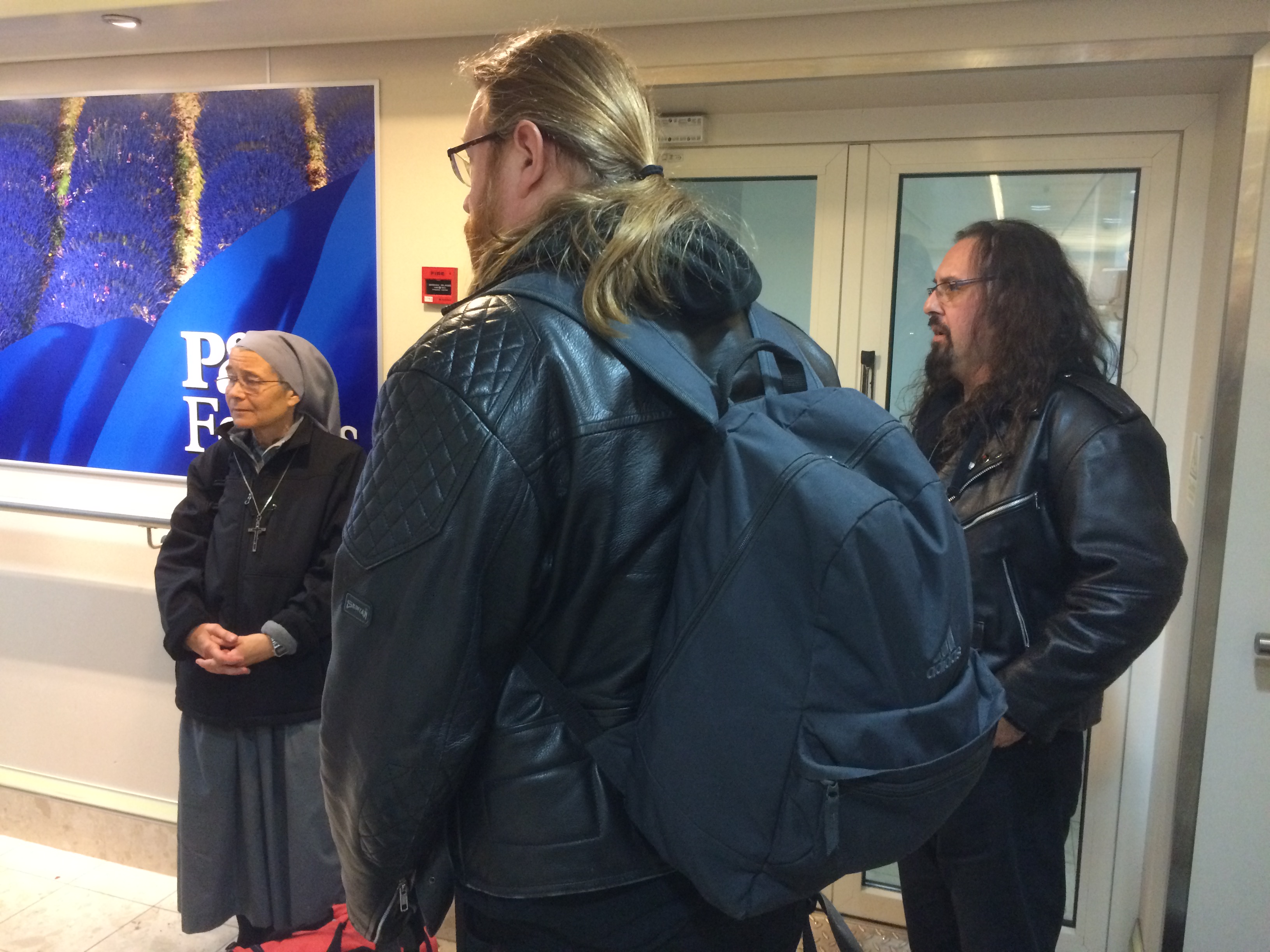 Yesterday was definitely a test. We made the ferry terminal in time and checked in, but the ferries were all over the place because of bad weather. Ironically we actually ended up getting an earlier scheduled ferry that was still delayed and left after our original ferry was due to leave. Yeah…we were back to the future.
There were only five foot passengers: us and a little old nun. It was classic; especially at immigration:
“Are you all travelling together?”
“She’s our manager.”
“SERIOUSLY??”
“Er…no.”
It’s definitely on the list of photos I wish I had when we reached Dover and were leaving the terminal she walked through the doors with Reece and I on either side and Scott and Mark behind. We looked like a seriously heavy duty escort from the Vatican. It just needed the Imperial March from The Empire Strikes Back and she would have looked like The Emperor arriving…or Nun Vader.

We were surviving on four hours sleep. Tried to get some sleep on the ferry but it was pretty busy and there was a woman nearby with one of those voices; like an Ostrich mating with a constipated camel. Didn’t help, but at least we were able to relax.

It took ages to disembark as we were shunted around the bloody ship, but we finally made it ashore go meet our Vans for Bands connection and pick up our trusty steed. As ever – a totally reliable company!

Then it was hell bent for leather up the motorways…and into traffic jams. Reece and I were both pretty tired. I’d reached that point of having a conversation with the steering wheel to keep awake. I won’t bore you with the details, as it was slightly surreal, but it turns out that the steering wheel on our van has a fine sense of humour and stunning grasp of historical fact.

Anyway…we FINALLY reached Stourbridge to discover that the Operation:Mindcrime people had hit the same transport problems – multiplied by their being on a bus – and were still on the M25. Time was racing by – and after exhausting every single avenue to make the show happen it was reluctantly cancelled by the venue manager (a very nice bloke). I know for a fact that this was extreme circumstances and everybody was very unhappy at this outcome.

So we were left with no choice but to head to the Travelodge and finally sleep.
Zzzzzzzzzzzzzzz